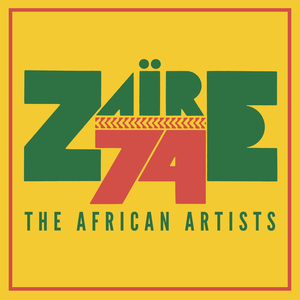 These historic recordings were made at one of the most extraordinary, but tragically over-looked, events in African music history, a three-day festival that took place from September 22-24 1974 in Kinshasa, Zaire (now the Congo), in advance of that now legendary boxing match, the Rumble In The Jungle between Mohammed ...

Ali and George Foreman.  Zaire 74 was remarkable because it was the first African festival of its kind, with leading African artists of the day appearing alongside James Brown and other major African-American stars.
The line-up included Africa’s greatest female singer Miriam Makeba – who was of course already well-known in the West – but also such now-legendary Zairean/Congolese musicians as Franco and Tabu Ley Rochereau, who were already major stars right across Africa, but still largely unknown elsewhere. Hugh Masekela and his friend and producer Stewart Levine had planned the festival in the hope of changing all that. The concerts were immaculately recorded and filmed, and it was hoped that the resulting movie and record deals would bring African music a new international audience, a decade before the West developed an interest in so-called ‘world music’.

As the world waited for the infamous Rumble in the Jungle match up between George Foreman and Muhammad Ali, trumpeter Hugh Masekela and producer Stewart Levine had a idea: To put on a three-day music festival uniting top African-American and African performers in a stadium in Kinshasa. They called it Zaire 74.

The festival and the recordings that came out of it became the stuff of legend, as James Brown, Bill Withers, and BB King shared the stage with African stars. Yet the African musicians’ beautifully recorded sets were never released.

Until now. Zaire 74: The African Performers (Wrasse Records; release: May 26, 2017) captures this unique moment in African music, offering fans the first listen of complete, remixed and mastered sets by:

These historic recordings were made at one of the most extraordinary, but tragically overlooked, events in African music history. Zaire 74 was remarkable because it was the first African festival of its kind, with leading African artists of the day appearing alongside James Brown and other major African-American stars.

The line-up included Africa’s greatest female singer Miriam Makeba – who was already well-known in the West and at the time of the festival was at the height of her powers– but also such now-legendary Zairean/Congolese musicians like Franco and Tabu Ley Rochereau, who were already major stars across Africa, but largely unknown elsewhere.

Masekela and Levine planned the festival in the hope of changing all that. The concerts were immaculately recorded and filmed, and it was hoped that the resulting movie and record deals would bring African music a new international audience, a decade before the West developed an interest in so-called “world music.”

The timing seemed right. This was an era of optimism in Africa, as the independence era continued to spread across the continent. The Carnation Revolution had marked the beginning of Portuguese withdrawal, with Guinea Bissau gaining its freedom less than a fortnight before the Zaire 74 shows kicked off . And as for Zaire itself, it had been freed from Belgian rule since 1960, though independence had not proved easy.

The democratically-elected Patrice Lumumba had been overthrown and killed, and General (now President) Mobutu had taken over after a military coup in 1965. He would later be remembered as a dictator who plundered his nation, but in 1974, the mood in Kinshasa was confident, boosted by Mobutu’s calls for “authenticity.” Following on from similar moves in Guinea, this was an attempt to create unity and a new national identity, with an emphasis on African names, dress and – of course – music.

African-Americans were understandably keen to join the celebration, and Mobutu was eager to promote Zaire as a leading player in independent Africa. The country’s musicians were determined to show what they could do as they took to the stage at the 20th of May Stadium – named after the day that Mobutu had seized power. They hoped it would lead to deserved exposure and success in the West. But it never happened.

Disputes over money and control meant that footage of the concerts, and these remarkable recordings, remained hidden away for years. There were tantalizing extracts from the shows in When We Were Kings (1997), the award-winning documentary of the celebrated Ali fight, though the film concentrated on James Brown and the American stars. And there were songs from the African artists included in another documentary, Soul Power (2008), though here again far more footage was devoted to James Brown.

But now, at last, the African stars of Zaire 74 can be heard. And over four decades on, they sound as fresh and exciting as they did on those hot nights in Kinshasa.

Hugh Masekela on the release:

At the conclusion of 1972, in the twelfth year of exile from my ancestral home, I embarked on a spiritual curiosity pilgrimage that steered me into the hearts of West and Central Africa.

I was inspired by musical recordings of outstanding musicians from the those corners of the continent; people like C.K Mann, The Ramblers Dance Band, E.T Mensah and Pat Thomas in Ghana; Bobby Benson, Fela Kuti, Commander Ebenzer Obeyi and Victor Uwaifo out of Nigeria; Kandia, Demba and Bala from Guinea and most of all the Belgian Congo’s traditional and urban dance music led by Luambo Makiadi aka Franco and Tabu Ley Rochereau.That country’s new dictator-president Mobuto Sese Seko had just renamed it Zaire

I came from Johannesburg in South Africa but had never set foot in any other country on the African continent.

Stewart and I chose the best people to handle all the demanding positions to be filled in order to produce the festival, which include engaging our old friend Chip Monk to build the massive stage and handle all of the details of presenting the festival, a position that he assumed during the Woodstock Music Festival in 1969.

We hired documentary film director Leon Gast to assemble some of the finest handheld camera crews available in order to document the entire event.

Stewart created a state-of-the-art recording studio in the stadium.

One day, before all the American artists were set to leave for Zaire, the fight was postponed for a month because of George Foreman getting injured during training. We decided to go ahead with the three night extravaganza as planned, and the performances both from America and Zaire lasted into the early hours of the morning. They were loved by the mostly Congolese audience in attendance.

All of this was brilliantly filmed and recorded, but after returning to the States with all the material our ‘’partner’’ Don King decides to change the “deal” and subsequently imposed a court injunction that effectively tied up all the footage and recordings.

Stewart and I decided that we never want anything to do with this hustler again, and leave it to Leon Gast to battle with him.

Leon hung on to all the film footage and music tapes for 20 years until he teamed up with producer David Sonnenberg and the film When We Were Kings is finally released in 1996. It was universally lauded and won the Academy Award for Best Documentary Feature of 1996.

The film features the Ali –Foreman championship bout and the events leading up to it including excerpts from the ZAIRE 74 music festival, none of which feature the Congolese artists who performed.

Director Jeffrey Kusama–Hinte, who was the editor on When We Were Kings decided that a great deal of the magic was left on the cutting room floor and created yet another valuable film from the enormous amount of raw footage and recordings. The film Soul Power released in 2008 focused more on the festival but once again mainly excluded the Zairian artists who performed so brilliantly.

Stewart Levine approached David Sonnenberg about acquiring the rights to release the festival performances of the Congolese artists and David provides us with the original tapes. With the genius contribution of Sunny Levine, Stewart’s composer-singer-producer son, the three of us spent a glorious five days editing and mixing the original musical recording tapes of Luamba Makiadi (Franco), T.P.O.K. Mazembe Jazz Orchestra, Tabu Ley Rochereau and Afrisa, Miriam Makeba and her ensemble, Abeti Masikni and her brother Abumba’s group, the Orchestre Stukas and the Pembe Dance Troupe.

It has taken us forty plus years to get here.

May you enjoy the recordings much more than the delightful euphoria we have finally come to cherish from this long journey back to ZAIRE 74.